Now with self guided Audio tour 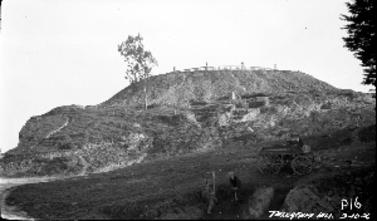 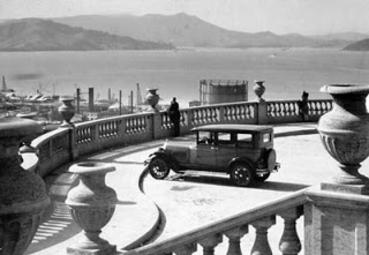 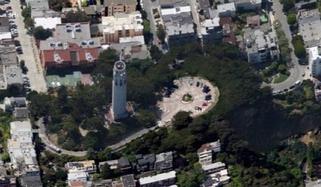 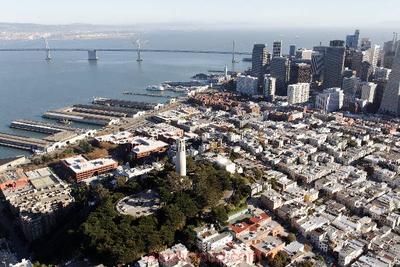 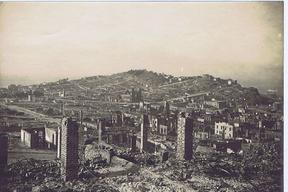 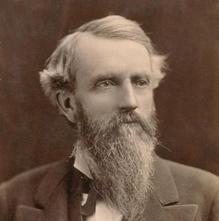 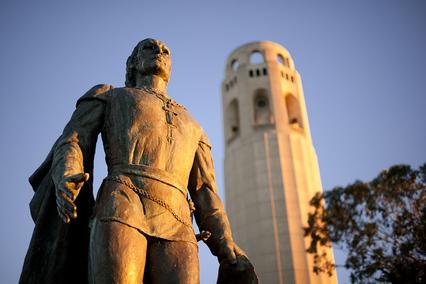 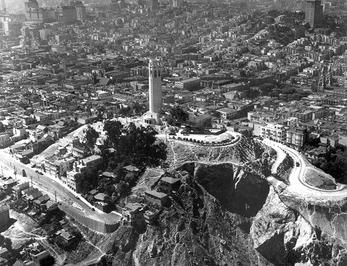 Coit Tower sits on a San Francisco historic area known as Pioneer Park. This is a 4.89-acre park crowning the top of Telegraph Hill in San Francisco. Pioneer Park was established in 1876 in celebration of the United States Centennial, this just means 100th year celebration.

Prior to establishment of the park, it was the site of the Marine Telegraph Station.

The site was purchased by a group of businessmen, including George Hearst in 1876 for $12,000 in an effort to preserve the site since hilltops during that time were being converted into commercial use.

The group then donated the land to the city on the condition that it'd remain green space and be named Pioneer Park, after the hill's first residents.

Coit Tower would come later in 1933 using a $100,000 bequest left to San Francisco by Lillie Hitchcock Coit. In 1957, a bronze statue of Christopher Columbus was donated to the park by the city's Italian-American community.

Thanks to the foresight of these studious residents we can now enjoy the breathtaking views and Coit Tower's historic murals.

Like the early residents for whom it is named, the park has had to battle for survival. When a storm destroyed the old Marine Telegraph Station which signaled approaching ships, lots on the hilltop became available for commercial use. To preserve them, a group of businessmen, including George Hearst, bought the 1.73-acre site for $12,000 in 1876 and donated it to the city, stipulating that the land be known as Pioneer Park, after the hill's first residents.

The park is bigger than the original purchased lots by the businessmen. Other purchases by the city enlarged the park substantially, and in 1877, the Board of Supervisors appropriated $5000 for improvements, consisting of a retaining wall and minimal grading. In the 1880s, San Francisco allotted its small park development fund to Golden Gate Park, then under construction. Pioneer Park remained high and dry. To stimulate public interest, a German-style castle-observatory offering beer and telescope views was constructed on the site of the telegraph station. The effort flopped and the building burned down in the early 1900s. The Gray Brothers Quarry was biting off the eastern side of the hill and downtown business interests were selling the excavated fill for Bay tidelands and paving contracts. A report from the Merchants Association described Telegraph Hill as 'scarred, gashed, dismantled and forlorn. In 1902, the California Club, the North Beach Improvement Club, and the California Outdoor Art League banded together to lobby for preservation of the hill. When a road to the summit was completed in 1923, public access became possible. To get more details about Lillie Hitchcock Coit and connection to the fire department, please go to our website www.coittours.com.

Pedestrian access is carefully routed to avoid erosion and harm to the plant life.

In 1995, the Pioneer Park Project was born. This public-private partnership, involving the Telegraph Hill Dwellers, San Francisco Beautiful, the Department of Public Works, and the Park and Recreation Department brought together a band of professional architects, landscape architects, designers, fund-raisers, and environmental educators, all working pro bono. They drew and refined plans to rebuild stairways, paths and terraces, restore natural habitat, and deal with the problems of erosion, safety and handicap access. The project raised over $1.3 million from a combination of public funding sources, foundations, corporations, individuals, and the 'Step into History' plan, which offers individuals a chance to support Pioneer Park visibly and literally. Each $500 contribution entitles the donor to have his or her name engraved on a tile to be placed on a stair riser in one of the park's new staircases. Many have purchased them to mark a birthday, an anniversary, or memory of a loved one.

North Beach is that rare thing -- a neighborhood that manages to be a perennial hit with tourists, and also to remain beloved by San Franciscans. It's best known as San Francisco's Little Italy, with its high density of check-clothed ristorantes, cafes and Old World delicatessens. It's also a popular pilgrimage for fans of the Beat movement seeking the old haunts of Kerouac and Ginsberg. However, North Beach is no relic, and it has much to offer beyond pasta and poetry.

This vital neighborhood is home to some of the liveliest nightclubs and bars in town. Small boutiques carrying handmade clothing and imported goods dot the streets, particularly on upper Grant Avenue. Though Italian restaurants appear to dominate the dining scene, there are plenty of other good spots to try once you've had your fill of lasagna, with menus featuring Japanese, French and contemporary fusion cuisine. City Lights, original publisher of Allen Ginsberg's "Howl," is still one of the best bookstores in San Francisco, and founder Lawrence Ferlinghetti can sometimes be seen strolling the neighborhood. Then there's Broadway, buzzing with neon and strip clubs and adding an incongruous dash of sleaze to all the culture and history.

Part of the old Barbary Coast, North Beach is steeped in the past -- Grant Avenue itself is the oldest street in San Francisco. In the early days, North Point docks served as a gateway for immigrants from South America, Europe and the Australian penal colonies. It wasn't until the late 1800s that thousands of Italians made the area their stronghold and turned it into the local Latin Quarter. The Italian-American community can also be credited in part with protecting the neighborhood against the fire that swept the city after the 1906 earthquake. According to legend, some enterprising residents cracked open the barrels of red wine in their cellars and saved their houses by draping them with wine-soaked blankets. In more recent history, North Beach has produced some notable people, including baseball great Joe DiMaggio, who moved there at the age of one and grew up in a flat at Valparaiso and Taylor. Former San Francisco mayor Joseph Alioto was born in North Beach.

Whether prowling for historic landmarks, sampling house-roasted espressos, shopping, clubbing, or chowing down, you'll find North Beach has plenty to offer for both a leisurely afternoon visit and a night on the town. Take a detour off the main drag of Columbus and you're likely to run across some unexpected treasure of a shop, restaurant or spectacular view. A word to the wise: avoid driving if possible, or plan to use a parking garage, as street parking in the area is notoriously scarce. Instead, try taking one of the three major bus lines (#15, #30 and #45) or two Cable Car lines that pass through the neighborhood.